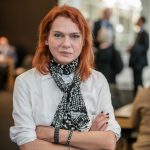 Aslı Erdoğan is a Turkish writer and human rights activist. She was a columnist for the daily Özgür Gündem and the Istanbul police arrested her after the failed coup d’état of 15 July 2016 for disturbing national unity. At the end of 2016 Erdoğan was released among conditions. In 2017 she was allowed to leave the country and came to Germany.